skip to main | skip to sidebar

The Blog of Gordon Pruitt the Pastor of St. Matthew's United Methodist Church in Richmond Virginia 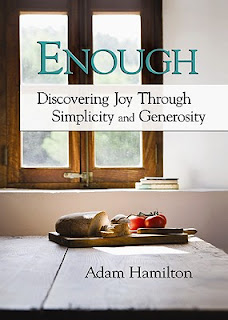 I went to Kansas City back in October for the Church of the Resurrection Leadership Institute with my annual stewardship sermon series already planned out. It was 3 weeks and was going to be from the book of Acts and was going to be titled "Enough." I had also written the fist letter to be mailed out to the members of the church. While I was at COR (short for Church of the Resurrection) I was told of a new resource put out by the church called, Enough, Experiencing Joy Through Simplicity and Generosity. This included a book by Adam Hamiltion which basically is his sermons on stewardship written out, and a workbook that included a timeline, letters, emails, sermon outlines, print pieces and a bunch of other stuff plus a DVD with videos and electronic copies of everything. This was a small church pastor's dream! On the plane ride home I was able to read the small book and it contained some of the best stewardship sermons and illustrations that i have read. If you are looking for a stewardship campaign and could use some help consider using Enough.

A Funny Moment on House 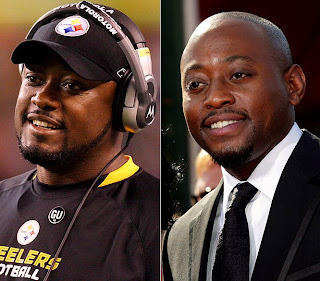 When I started watching House two years ago I was amazed by how much Foreman (Omar Epps) looked like Pittsburg Steelers' coach Mike Tomlin. Last night this was referenced. I wonder if anyone has ever seen them in the same room?

I never thought of this when i was a child

Rereading a Devotional guide to Renovation of the Heart by Dallas Willard and the first chapter is titled Kingdom Possibilities. When we read certain parts of scripture its as if we are looking into another world, a world that many professing Christians do not believe can be entered into. Willard believes as i do that this world is possible and is promised. Ephesians 3:19-20, 1 Peter 1:8,22, 2:1, 2:15, and 5:17 are some of the scriptures, (look them up)!

Jan Johnson who also helps with this devotional, writes the following which I think is awesome.

Is it possible we rush to say, "nobody's perfect" because we've met so few people who show genuine love and move through life without superiority, insensitivity or gossip? Mayb ewe have met a few but didn't notice the beauty of their Christlikeness. Instead, we were impressed by other things--their ability to quote Bible verses or answer questions about world religions. Those who speak articulately about the Bible may draw our attention more than those who live a transformed life.

Try picturing this hypothetical moment of dwelling on the beauty of God and the kingdom life: Let's say i confessed to you my disgust with someone who annoyed me and how hopeless I felt about ever loving this person. What if instead of trying to make me feel better by saying, "Nobody's perfect," you said you believed in God's power to transform me into a radical person who pays loving attention to those who annoy me? What if you prayed for me about this? What if later that day you encountered an annoying person and, without thinking, treated that person with kindness and attentiveness--partly because of the transforming effect of our conversation about the kingdom personality?

I don't know about you but that is the kind of life I want to live.

Posted by Gordon Pruitt at 8:48 AM 0 comments

A few weeks ago we had a new family attend our church. I sent a thank you for coming email and below is part of the response I received.

Also, my children are still growing from their communion experience! Our
background is Baptist and while my kids have witnessed and heard about
this ceremony they so enjoyed the action. My middle daughter asked if we
were going to go back to 'that church to remember Jesus next Sunday'.

Gordon Pruitt
Richmond, VA
I am the Pastor of a small church located in the outskirts of Richmond VA.

web sites i look at